Part of the Rebe’s Den mission is to highlight stories that inspired, that show human kindness and so much more. I had the honor to interview Kevin Yates who is a drummer at Promethium and has his own YouTube Channel FYM Reacts.

I was inspired to share his story because I was fascinated by it all unfolded. On FYM Reacts, Kevin regularly reviews songs from various artists in the metal and rock genre.

There’s something to be said of supporting each other, no matter where you are or what you do. Sometimes it really takes only one thing and in this instance, it is the love for heavy metal and rock music.

Seasons band found out about FYM Reacts from Heard by Eyes and what he is doing with FYM Reacts and thought to themselves “What could can we do for someone who has done so much for them” (Matty from Seasons).

He got his interest in music during his teen years and later discovered reaction channels on YouTube and it inspired him to do something similar. He dives deeper into this story in our conversation. And it’s really incredible because he’s exposing new music from bands who have been around awhile or have just gotten started. And as an artist, being noticed is and finding new fans of your work, is maybe one of the coolest things.

And in collaboration with the Event Organizers for Metal in the Mountains, Kevin will now be able to do his FYM Reacts show at the venue.

The whole idea here is paying it forward and building a better community for tomorrow. We ask that you guys please do the same. Help somebody, surprise someone who deserves it, give a gift but keep it going! (Matty from Seasons)

But Seasons band wasn’t the only one that got involved. Check out the Video from Booker of Silent Ire.

Which brings me to another point Kevin wanted me to highlight in this post – after the event on May 31-June 1, he will have an ongoing campaign to give back to the community. This will be to pay it forward in essence in terms of what the community has done for me. Every month I will be running giveaway whether it’s for merch, concert tickets, help with bills etc. It’s both mine & the community’s vision to keep giving back so others can experience the kindness as I have.

So be sure to like, follow and subscribe to the FYM Reacts Social Media Challenges so you can stay in the loop when that campaign launches.

If you are in the UK and nearby and want to check out a Promethium Show, here the dates and places! 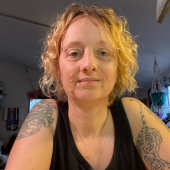 Author + Artist + Coach + Mentor + Consultant and the CEO of The Rebels Den. She has a Bachelor's degree in Accounting, a Master's in Mental Health Counseling. Her mission is to help Rebel's, Creatives and those that feel like they don't ever fit in, follow their dreams and focus on their goals!

Never Give Up Hope – Interview with Carol Graham

We want to interview YOU